As introduced in Chapter 1, Lev Vygotsky was a Russian psychologist who argued that culture has a major impact on a child’s cognitive development. He believed that the social interactions with adults and more knowledgeable peers can facilitate a child’s potential for learning. Without this interpersonal instruction, he believed children’s minds would not advance very far as their knowledge would be based only on their own discoveries. Let’s review some of Vygotsky’s key concepts.

8.2.1 Zone of Proximal Development and Scaffolding

Vygotsky’s best known concept is the zone of proximal development (ZPD). Vygotsky stated that children should be taught in the ZPD, which occurs when they can perform a task with assistance, but not quite yet on their own. With the right kind of teaching, however, they can accomplish it successfully. A good teacher identifies a child’s ZPD and helps the child stretch beyond it. Then the adult (teacher) gradually withdraws support until the child can then perform the task unaided. Researchers have applied the metaphor of scaffolds (the temporary platforms on which construction workers stand) to this way of teaching. Scaffolding is the temporary support that parents or teachers give a child to do a task. 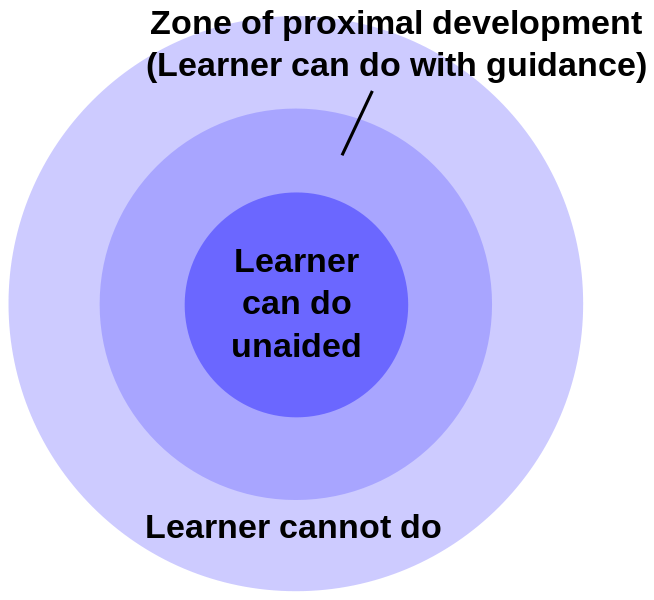 Do you ever talk to yourself? Why? Chances are, this occurs when you are struggling with a problem, trying to remember something, or feel very emotional about a situation. Children talk to themselves too. Piaget interpreted this as egocentric speech or a practice engaged in because of a child’s inability to see things from another’s point of view. Vygotsky, however, believed that children talk to themselves in order to solve problems or clarify thoughts. As children learn to think in words, they do so aloud before eventually closing their lips and engaging in private speech or inner speech.

Thinking out loud eventually becomes thought accompanied by internal speech, and talking to oneself becomes a practice only engaged in when we are trying to learn something or remember something. This inner speech is not as elaborate as the speech we use when communicating with others (Vygotsky, 1962).307

Piaget was highly critical of teacher-directed instruction, believing that teachers who take control of the child’s learning place the child into a passive role (Crain, 2005). Further, teachers may present abstract ideas without the child’s true understanding, and instead they just repeat back what they heard. Piaget believed children must be given opportunities to discover concepts on their own. As previously stated, Vygotsky did not believe children could reach a higher cognitive level without instruction from more learned individuals. Who is correct? Both theories certainly contribute to our understanding of how children learn.