During middle and late childhood children make strides in several areas of cognitive function including the capacity of working memory, their ability to pay attention, and their use of memory strategies. Both changes in the brain and experience foster these abilities. In this section, we will look at how children process information, think and learn, allowing them to increase their ability to learn and remember due to an improvement in the ways they attend to, store information, and problem solve.453

Working Memory: The capacity of working memory expands during middle and late childhood, research has suggested that both an increase in processing speed and the ability to inhibit irrelevant information from entering memory are contributing to the greater efficiency of working memory during this age (de Ribaupierre, 2002). Changes in myelination and synaptic pruning in the cortex are likely behind the increase in processing speed and ability to filter out irrelevant stimuli (Kail, McBride-Chang, Ferrer, Cho, & Shu, 2013).454 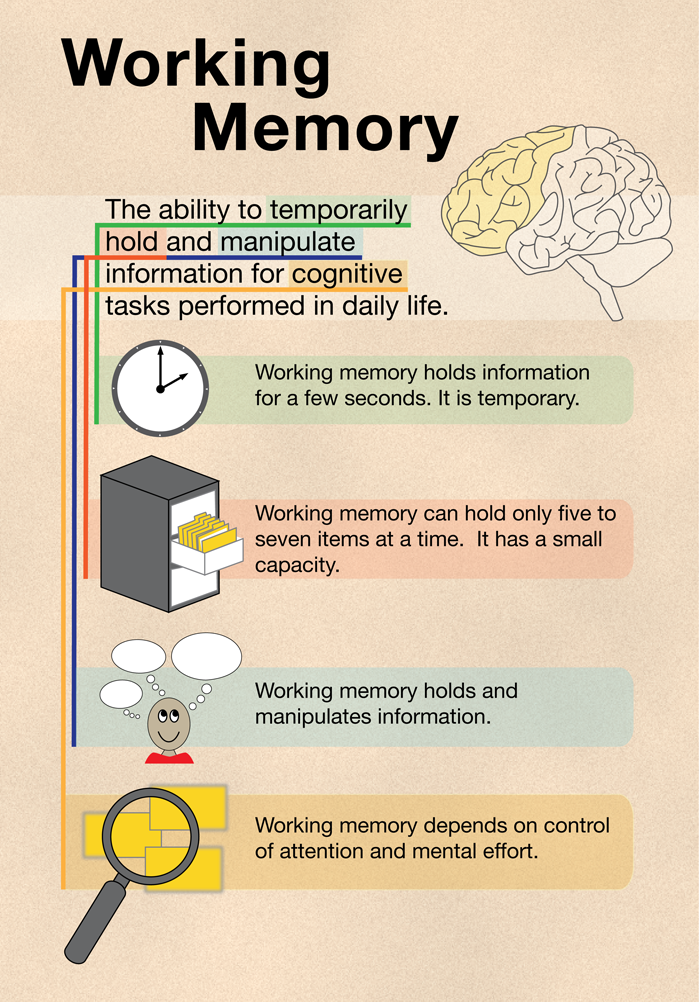 Attention: As noted above, the ability to inhibit irrelevant information improves during this age group, with there being a sharp improvement in selective attention from age six into adolescence (Vakil, Blachstein, Sheinman, & Greenstein, 2009). Children also improve in their ability to shift their attention between tasks or different features of a task (Carlson, Zelazo, & Faja, 2013). A younger child who is asked to sort objects into piles based on type of object, car versus animal, or color of object, red versus blue, would likely have no trouble doing so. But if you ask them to switch from sorting based on type to now having them sort based on color, they would struggle because this requires them to suppress the prior sorting rule. An older child has less difficulty making the switch, meaning there is greater flexibility in their intentional skills. These changes in attention and working memory contribute to children having more strategic approaches to challenging tasks.

Memory Strategies: Bjorklund (2005) describes a developmental progression in the acquisition and use of memory strategies. Such strategies are often lacking in younger children, but increase in frequency as children progress through elementary school. Examples of memory strategies include rehearsing information you wish to recall, visualizing and organizing information, creating rhymes, such as “i” before “e” except after “c”, or inventing acronyms, such as “roygbiv” to remember the colors of the rainbow. Schneider, Kron-Sperl, and Hünnerkopf (2009) reported a steady increase in the use of memory strategies from ages six to ten in their longitudinal study. Moreover, by age ten many children were using two or more memory strategies to help them recall information. Schneider and colleagues found that there were considerable individual differences at each age in the use of strategies, and that children who utilized more strategies had better memory performance than their same aged peers.