4.2 Proportions of the Body

Another dramatic physical change that takes place in the first several years of life is the change in body proportions. The head initially makes up about 50 percent of our entire length when we are developing in the womb. At birth, the head makes up about 25 percent of our length (think about how much of your length would be head if the proportions were still the same!). By age 25 it comprises about 20 percent our length. Imagine now how difficult it must be to raise one’s head during the first year of life! And indeed, if you have ever seen a 2 to 4 month old infant lying on the stomach trying to raise the head, you know how much of a challenge this is. The comparison in this graphic was originally introduced in the last chapter. 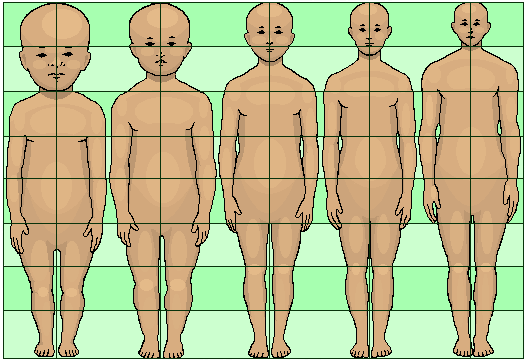 While most of the brain’s 100 to 200 billion neurons are present at birth, they are not fully mature and during the next several years dendrites or connections between neurons will undergo a period of transient exuberance or temporary dramatic growth.

Components of the Neuron

Synaptogenesis, or the formation of connections between neurons, continues from the prenatal period forming thousands of new connections during infancy and toddlerhood. This period of rapid neural growth is referred to as Synaptic Blooming. This activity is occurring primarily in the cortex or the thin outer covering of the brain involved in voluntary activity and thinking.

The prefrontal cortex that is located behind our forehead continues to grow and mature throughout childhood and experiences an additional growth spurt during adolescence. It is the last part of the brain to mature and will eventually comprise 85 percent of the brain’s weight. Experience will shape which of these connections are maintained and which of these are lost. Ultimately, about 40 percent of these connections will be lost (Webb, Monk, and Nelson, 2001). As the prefrontal cortex matures, the child is increasingly able to regulate or control emotions, to plan activity, strategize, and have better judgment. Of course, this is not fully accomplished in infancy and toddlerhood, but continues throughout childhood and adolescence.

Another major change occurring in the central nervous system is the development of myelin, a coating of fatty tissues around the axon of the neuron. Myelin helps insulate the nerve cell and speed the rate of transmission of impulses from one cell to another. This enhances the building of neural pathways and improves coordination and control of movement and thought processes. The development of myelin continues into adolescence but is most dramatic during the first several years of life.154