These notes accompany Chapter 1 — Statistics and samples — of our textbook. The reading below is required, Whitlock and Schluter (2020) is not, but is encouraged.

Motivating scenario: You have seen or heard about statistics, but you don’t really know what people are getting at. You hear words like “p-value,” “statistically significant,” “effect size,” “bias,” or “nonindependent” but can’t pinpoint exactly what they mean?

Statistics claims to be obsessed with the TRUTH. It’s meant to be a way of understanding the world. It’s meant to describe and differentiate, and ideally, to tease apart causation from correlation. These three goals

Are the beams of light we, as statisticians, try to shine on questions. That is – this is what you call a statistician to do.

My goal is to enable you to unleash these powers. But also to realize that on their own, estimation, hypothesis testing, and even causal inference are of pretty limited utility — we could go around estimating useless trivia, or testing hypotheses that have little to do with our motivating questions, or separating between unlikely or non-exclusive causes. As such, in BIOSTATS our goals are more ambitious — we constantly ask:

The more time I spend as The Statistician in the room, the more I think the best skill you can cultivate is the ability to remain calm and repeatedly ask "What question are you trying to answer?"

To a statistician the TRUTH is a population – a collection of all individuals of a circumscribed type (e.g. all grasshoppers in North America), or a process for generating these individuals (see note below). We characterize a population by its parameters (e.g. its TRUE mean, or its TRUE variance).

However, it is often impractical or impossible to study every individual in a population. As such, we often deal with a sample – a subset of a population. We characterize a sample by taking an estimate of population parameters.

So a major goal of a statistical analysis is how to go from conclusions about a sample which we can measure and observe, to the population(s) we care about. In doing so we must worry about random differences between a sample and a population (known as Sampling Error, as well as any systematic issues in our sampling or measuring procedure which will cause estimates to reliably differ from the population (known as Sampling Bias).

Sometimes we think of a population as a process generating our data. For example, when we compare binomial outcomes to the flip of a fair coin, we do not think about all coins flipped in the world. Rather we think about what we would expect to observe from the process of flipping a fair coin.

Estimates of any sample will differ somewhat from population parameters by chance sampling and/or imprecise measurement. This is why we always consider and report uncertainty in estimates and note that chance can contribute to any result. Much of this course focuses on acknowledging and accommodating sampling error. We can reliably decrease sampling error by increasing the sample size. Note that despite its name, sampling error does not imply that the researcher made a mistake.

I therefore think it’s more appropriate to call this chance deviation of estimates away from parameters “The First Law of sampling” rather than sampling error. 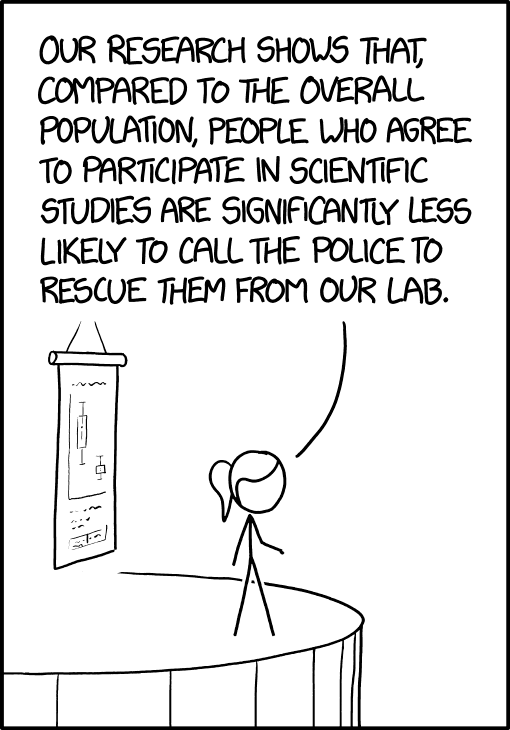 There are many ways for samples to systematically deviate from the population.

For example, non-randomly selected individuals will likely differ from the population in important ways. e.g. students who raise their hand in class are perhaps more likely to know the answer than a randomly chosen student, or brightly colored individuals are more likely to be spotted than drab individuals. Such phenomena are known as volunteer bias.

Another devious form of bias is known as survivorship bias, in which survivors differ from a population in critical ways. For example, students at the University of Minnesota likely had higher high school GPAs than a random sample of individuals from across the twin cities of the same age.

A classic example of survivorship bias is this distribution of gunshot holes in airplanes returning from WWII — the army initially reacted to the prevalence of holes in the wings and tail by suggesting that such parts of the plane be reinforced. However, Abraham Wald pointed out that airplanes that did not return were the ones who needed more help and these where likely shot where we don’t see holes.

Most (intro) stats assumes that samples are independent. If observations in a sample are independent of on another, the probability that one individual is studied is unrelated to the probability that any other individual is studied. While this is desirable, it is sometimes impossible, so we address methods for accommodating non-independence later in the term.

While statisticians claim to be interested in TRUTH and POPULATIONS, they quickly give up on this. Rather than characterizing a population in full, or describing the complex processes such as metabolism, meiosis, gene expression that generate data, statisticians build simple models to abstract away the biological complexity and make questions approachable. As such, rather than fully describing a distribution from a population, statisticians often use well characterized statistical distributions to approximate and model the actual biological process.

So, while we use statistics to search for truth, we must always remember this underlying fiction. As we conduct our statistics always consider the relationship between our biological models/phenomena and the stats model we use to approximate it. If our statistical model is inappropriate for our biological question, we cannot reasonably take home much from the result. That said, we’re doing statistics not physiology, and so our goal is to make use of appropriate statistical abstractions, not to reconstruct the whole biological system (even if we’re doing statistics on physiology).

“All models are wrong, but some are useful.”

1.4 Types of Variables and Data

As we build and evaluate statistical models, a key consideration is the type of data and the process that generates these data. Variables are things which differ among individuals (or sampling units) of our study. So, for example, height, or eye color, or the type of fertilizer applied to a site, or the number of insect species per hectare are all variables.

We often care to distinguish between explanatory variables, which we think underlie or are associated with the biological process of interest, from response variables, the outcome we aim to understand. This distinction helps us build and consider our statistical model and relate the results to our biological motivation.

Data can come in different flavors. It is important to understand these, as they should direct our model building and data summaries, interpretation and data visualization.

Numeric variables are quantitative and have magnitude, and come in a few sub-flavors. As we will see soon, these guide our modeling approaches:

Not all numbers are numeric. For example, gene ID is a number but it is an arbitrary marker and is not quantitative.

Categorical variables are qualitative, and include,

The third major goal of statistics (in addition to estimation and hypothesis testing) is inferring causation. When hoping to do so, we must consider the type of study.

A randomized control experiment, in which treatments are randomly assigned to individuals is considered the gold-standard for establishment of causation. If neither the subjects nor the experimenters know the treatment, a randomized control study can allow us to infer causation. However, some caution is warranted here – a causal relationship in a controlled experiment under specified settings may not imply a causal relationship in nature. For example, exceptionally high doses of a pesticide may cause squirrels to die, but this does not mean that the smaller dose of insecticide found around farm fields is responsible for squirrel death.

Additionally, randomized control experiments are often unfeasible, impractical, and/or impossible. As such, scientists often rely on observational studies in which treatments are not randomly assigned to individuals. In observational studies, confounding variables – unmodelled variables which distort the relationship between explanatory and response variables – can bias our interpretation. We therefore must show extreme caution when attempting to learn about causation from observational studies. However, the rapidly developing field of causal inference is establishing a set of approaches that can help us disentangle correlation and causation.

The homework (due by 7 am on monday) is on canvas. It consists of:

Population A collection of all individuals of a circumscribed type, or a generative process from which we can generate samples.
Sample A subset of a population – individuals we measure.

Parameter A true measure of a population.
Estimate A guess at a parameter that’s made from a finite sample.

Explanatory variables are variables we think underlie or are associated with the biological process of interest.
Response variables are the outcome we aim to understand.