These notes accompany portions of Chapter 4 — Estimating with Uncertainty — which we first encountered in Section 7, and the “Bootstrap Standard Errors and Confidence Intervals” section of Chapter 19 (pages 647-654) of our textbook. The reading below is required, Whitlock and Schluter (2020) is not.

If you want a different (or another) presentiation of this material, I highly recommend Chapter 8 of Ismay and Kim (2019) as an optional reading.

If you want to read more about visualizing uncertainty, I suggest Clause Wilke’s chapter on the subject (Wilke 2019).

Motivating scenarios: You have a sample and made an estimate, and want to communicate the precision of this estimate.

Learning goals: By the end of this chapter you should be able to:

In addition to this reading, the other assignments are:

In Section 10 we sampled from a population many times to build a sampling distribution. But, if we had data for an entire population, we would know population parameters, so there would be no reason to calculate estimates from a sample.

In the real world we have a small number (usually one) of sample(s) and we want to learn about the population. This is a major a major challenge of statistics (See Section 1).

We conceptualize populations as truth with true parameters out there.

Because (a good) sample is taken from a population at random, a sample estimate is influenced by chance.

The standard error quantifies this variability as the standard deviation of the sampling distribution.

Reflect on the two paragraphs above. They contain stats words and concepts that are the foundation of what we are doing here.

Because estimates from samples take their values by chance, it is irresponsible and misleading to present an estimate without describing our uncertainty in it, by reporting the standard error or other measures of uncertainty.

Question: We usually have one sample, not a population, so how do we generate a sampling distribution?
Answer: With our imagination!!! (Figure 11.1). 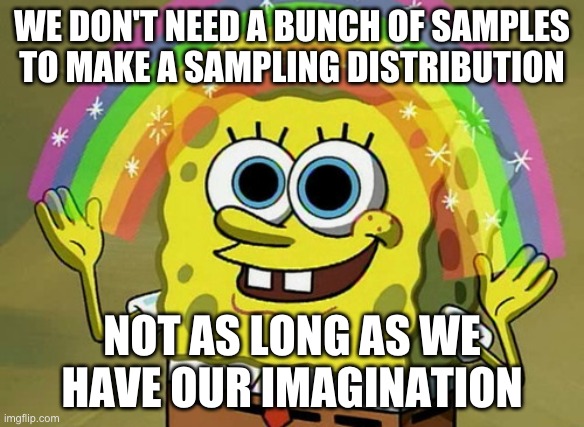 Figure 11.1: We use our imagination to build a sampling distribution by math, simulation, or bootstrapping.

Don’t worry about the first two too much – we revisit them throughout the course. For now, just know that whenever you see this, we are imagining an appropriate sampling distribution. Here we focus on bootstrapping.

11.2.1.1 Resampling from our sample (Bootstrapping)

While statistics offers no magic pill for quantitative scientific investigations, the bootstrap is the best statistical pain reliever ever produced.

So we only have one sample but we need to imagine resampling from a population. One approach to build a sampling distribution in this situation is to assume that your sample is a reasonable stand-in for the population and resample from it.

Of course, if you just put all your observed values down and picked them back up, you would get the same estimate as before. So we resample with replacement and make an estimate from this resample – that is, we

To get the bootstrapped sampling distribution, you would repeat this process many times, but that is too tedious to do manually. For now, try to imagine what would happen.

While the exercise above was useful, it would be tedious and unfeasible to do this more than a handful of times. Luckily, we don’t have to, we can use a computer to conduct a bootstrap.

EXAMPLE Say we are studying the duration of light pulses of male fireflies, Photinus ignitis, a species in which females prefer to mate with males that are bright for longer pulses. We can look at pulse duration data, collected by Cratsley and Lewis (2003) data, to estimate the mean duration of pulses and the uncertainty in this estimate.

First (as always) let’s look at the actual data. You could do this with glimpse(), view(), or just typing firefly.

Calculating estimates from the data

Now we make an estimate from the data! We can bootstrap any estimate - a mean, a standard deviation, a median, a correlation, an F statistic, a phylogeny, whatever. But we will start with a mean for simplicity.

So, our sample estimate is that the mean firefly pulse rate is 95.94. But that is just our sample.

Now we cannot learn the true population parameter, but we can bootstrap to get a sense of how far from the true parameter we expect an estimate to lie.

Resampling our data (with replacement) to generate a single bootstrap replicate

First, let’s use the slice_sample() function to generate a sample of the same size. You will notice that this code is very similar to what we wrote for sampling (Section 10.2) except that we

So, lets look at the resampled data:

To confirm that my resampling with replacement worked, let’s make sure some we see some individuals more than once, and some not at all.

So, now that it looks like we resampled with replacement correctly (we see some individuals a few times, some zero times), let’s make an estimate from this resampled data.

So, the difference between the sample estimate and the resample-based estimate is 2.26. But this is just one bootstrap replicate.

Resampling many times to generate a bootstrap distribution

Let’s do this many (10,000) times with the replicate() function, much like we did Section 10.3.1.1 – except we set prop = 1 and replace = TRUE (rather than size = sample.size - were is sample.size\(<\) population.size, and replace = FALSE). We then visualize this bootstrapped sampling distribution as a histogram.

The bootstrap is incredibly versatile - it can be used for any estimate, and, with enough care for study design, can be applied to almost any statistical problem. Because the bootstrap does not assume much about the shape of the variability in a population, it can be used when many other method we cover this term fail.

Because it requires some computer skills, and because it solves hard problems, the bootstrap is often taught at the end of an intro stats course. For example, the bootstrap is covered in Computer intensive methods of our textbook (Section 19.2 of Whitlock and Schluter (2020)). But I introduce it early because it is both useful and helps us think about the sample standard error and confidence intervals (below).

If you don’t know anything about statistics, learn the bootstrap. Seriously, think of it as a “statistical pain reliever”!! My new favorite term for the approach that underlies almost everything I do... https://t.co/jCHozq80oM

That said, a bootstrap is not always the best answer.

In Section 10 we learned how to generate a (potentially infinite) number of samples of some size from a population to calculate the true standard error. But, in the real world we estimate the standard error from a single sample.

Again, we can use our imagination to calculate the standard error, and again we have math, simulation, and resampling as our tools.

We already did the hard work of bootstrapping, so now we find the bootstrap standard error as the standard deviation of the bootstrapped sampling distribution 11.3.

Watch the videos below for a nice explanation of confidence intervals. Note: I split this video into three parts and excluded the bits about calculating confidence internals under different scenarios because that’s a distraction at this point. We will return to calculations as they arise, but for now we will estimate confidence intervals by bootstrapping.

Figure 11.4: Explanation of confidence intervals from Crash Course Statistics. I split this into three parts removing the bits that arent immediately relevant to us.

As explained in the videos above, Confidence intervals provide another way we describe uncertainty. To do so we agree on some level of confidence to report, with 95% confidence as a common convention.

Explore the webapp from Whitlock and Schluter (2020) to make this idea of a confidence interval more concrete. Try changing the sample size (\(n\)), population mean (\(\mu\)), and population standard deviation (\(\sigma\)), to see how these variables change our expected confidence intervals.

Figure 11.5: Webapp from Whitlock and Schluter (2020) showing the disrtibution of confidence interavals. Find it on their website.

A confidence interval should be taken as a guide, not a bright line. There is nothing that magically makes 99.5 a plausible value for the mean and 99.7 implausible.

We can add these confidence intervals to our plot with geom_vline()

The code below shows how we 95% confidence intervals to out ggplot by telling the stat_summary() function that we want R to calculate and show bootstrap based 95% confidence limits.

Figure 11.7: R will calculate and display 95% bootstrap confidence limits if we add stat_summary(fun.data =mean_cl_boot). Faint blue horizontal lines (from my boostrap, above), closely match the bootsrap R just did.

NOTE: stat_summary() uses the Hmisc package, so if this code is not working for you, type install.packages("Hmisc").

While this display is most traditional Clause Wilke has recently developed a bunch of fun new approaches to visualize uncertainty (see his R package, ungeviz), and the chapter on the subject (Wilke 2019), is very fun. We show one such sample in Figure 11.8. 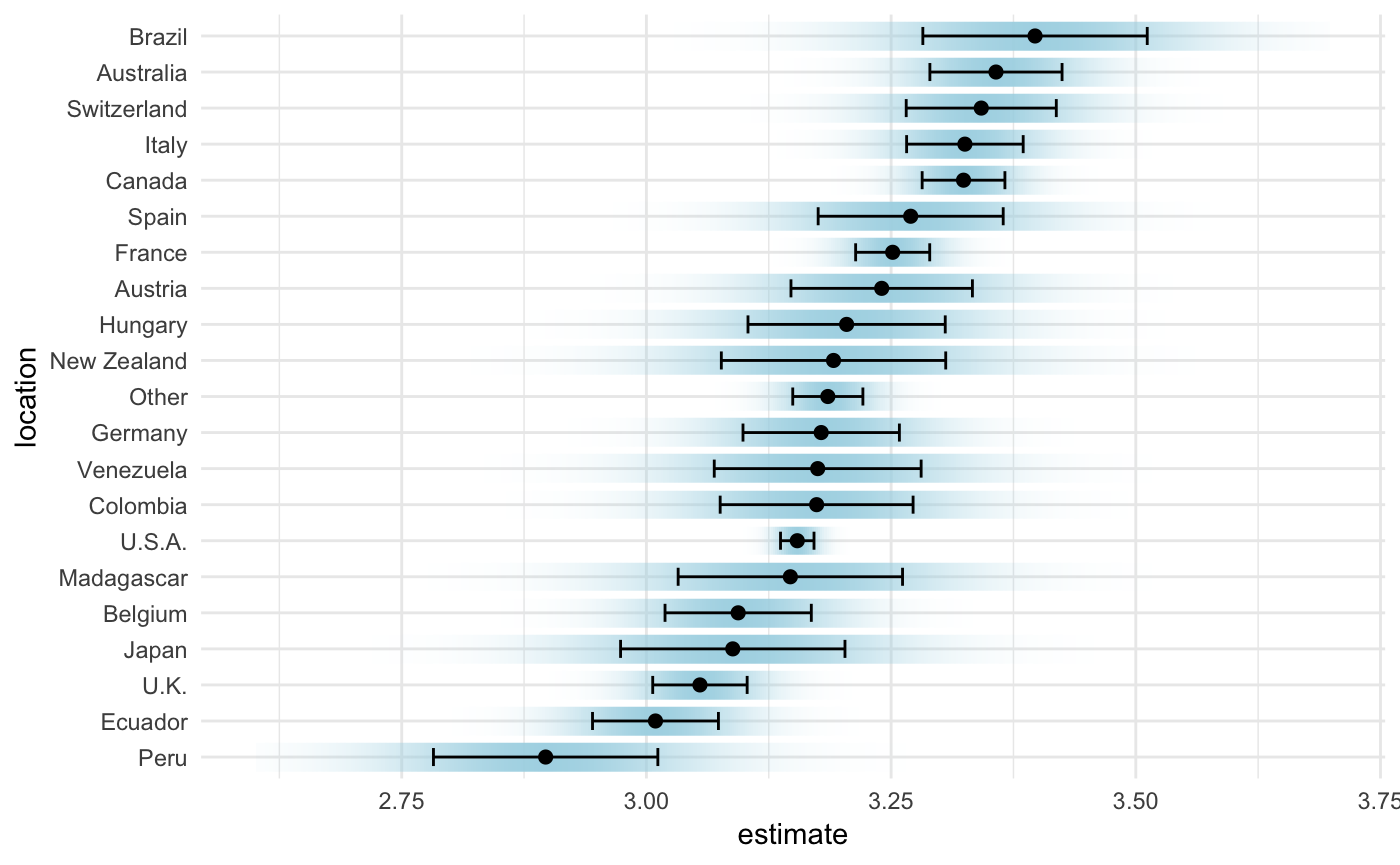 Figure 11.8: A novel form of visualizing uncertainty provides a smoother view of uncertainty, to complement the traditional confidence limits based display.

So long as a sample isn’t too small, the bootstrap standard error and bootstrap confidence intervals are reasonable descriptions of uncertainty in our estimates.

Above, we also pointed to mathematical summaries of uncertainty. Throughout the term, we will cover different formulas for the standard error and 95% confidence interval, which depends on aspects of the data – but rough rules of thumb are:

11.5.1 Optional: Use existing R packages to bootstrap for you

There are many R packages that have functions to perform a bootstrap. I like to have us write the bootstrap ourselves because I think it clarifies what is really happening, and because its sometimes easier towrite your own code than figure out a package.

Here, I show two commonly used packages – called infer and [mosaic](https://github.com/ProjectMOSAIC/mosaic). Both packages do way more than bootstrapping, and have been developed in concert with statistics courses.

As you see this matches our own coding