Chapter 27 Predicting one continuous variable from two (or more) things

This text (roughly) follows Chapter 18 of our textbook. The reading below is required, Whitlock and Schluter (2020) is not.

Motivating scenarios: We have numerous explanatory variables and want to develop an synthetic model.

A linear model predicts the response variable, as \(\widehat{Y_i}\) by adding up all components of the model. 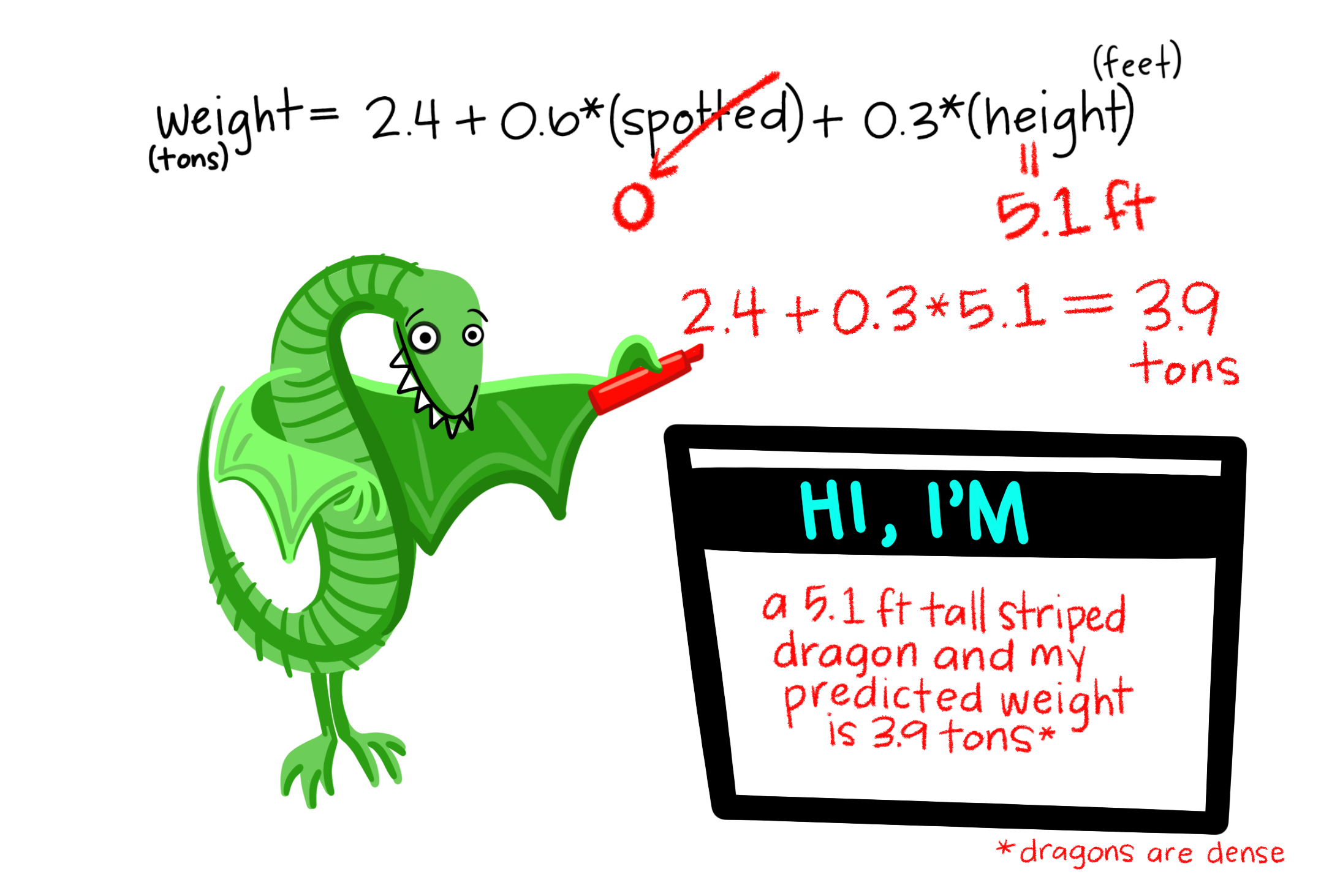 Linear models we have seen

So far we’ve mainly modeled a continuous response variable as a function of one explanatory variable. But linear models can include multiple predictors – for example, we can predict Dragon Weight as a function of both a categorical (spotted: yes/no) and continuous variable in the same model.

27.1.1 Test statistics for a linear model

We note that linear models can include e.g. squared, and geometric functions too, so long as we get out predictions by adding up all the components of the model.

Often including a cubic, or even a quadratic term is useful – but be thoughtful before adding too many in – each additional term takes away from our degrees of freedom, complicates interpretation, and may overfit the data. Let your biological intuition and statistical reasoning guide you.

Let’s revisit our example polynomial regression example predicting the number of species from the productivity of the plot to work through these ideas. Recall that

Let’s write a descriptive equation for each model

We present these models in Figure 27.1. See that we can add a polynomial fit to our ggplot by typing formula = y ~ poly(x, 2, raw = TRUE) into the geom_smooth function.

Fitting a model with a linear term in R should look familiar to you. linear_term <- lm(n.species ~ Biomass, bmass)

There are a bunch of ways to add a polynomial term.

27.2.1.2 Interpretting the output of a polynomial regression – model coefficents

So, let’s look at this polynomial regression

The output of this model should look familiar. Our rows are

Writing down this equation, we predict species number as

A value which makes sense, as it seems to be where out curve intersects with 250 in Figure ??B.

The p-values in this output do not describe the statistical significance of the predictors!! DO NOT INTERPRET THESE P-VALUES AS SUCH

One way to think about this is to just look at our simple linear model which shows basically no association between biomass and species number (and the association it shows it slightly negative).

Note The summary.lm() output still usefully provides our estimates and uncertinaty in them – so don’t ignore it!

So how do we get significance of each term? We look at the ANOVA output!

We now conclude that the association between n.species and the linear term of Biomass would be quite expected from the null. How do we square these ideas? I think of the significance of the linear term as how weird it would be to see a non-zero linear estimate in the absence of a squared term. However, this is not fully correct, as this P-value differs from the one above with just the linear term. To make sense of this, let’s dig into how we calculate the sums of squares for these larger models.

“Sequential” Type I Sums of squares

We’ll see in this and the next section that there’s a real issue in which variable we attribute our sums of squares to in larger linear models.

In many cases (see below) Sequential “Type I” sums of squares make the most sense. Here we

We can calculate these sums of squares in R as follows, and then compute mean squares and p-values. Before I do this, I make a tibble with prediction from both the simple linear model with just a linear term, and the fuller linear model with the linear and squared term.

You can scroll through the output above to see that our calculations match what anova() tells us!!!

Calculating Sums of Squares sequentially, as we did in Figure 27.2, is the default way R does things.

In general sequential sums of squares make the most sense when

Figure 27.3: Examples of balanced and unbalanced statistical designs, from statistics how to.

In the next class, we will look into other ways to calculate the sums of squares.

27.4 Two categorical variables without an interaction

We saw that paired t-tests increase our power because they control for extraneous variation impacting each pair. We often want to use a similar study design for a study with more than two explanatory variables.

For example, in a randomized “Controlled Blocked Design” each “block” gets all treatments, and by including treatment in our model we can explain variability associated with block unrelated to our main question. In such models we don’t care about the statistical significance of the block, we just want to use block to explain as much variation as possible before considering treatment.

In the study below, researchers wanted to know if the presence of a fish predator impacted diversity pf the marine zooplankton in the area. To find out they introduced the zooplankton with no, some, or a lot of fish, in mesh bags in a stream. Each stream got three such bags – one with no, one with some, and the other with many fish. This was replicated at five streams, so each stream is a “Block”.

Figure 27.4: The prey and none, some or lots of its predator are put in mesh bags in five streams

The raw data are presented below, with means for treatments in the final column.

We can conceive of this as a linear model, in which we predict diversity as a function of block and treatment

\[DIVERSITY = BLOCK + TREATMENT\] We enter the model into R as follows

NOTE Uhhohh. Something went wrong here. Why is there only one value for block, when there are five? It’s because R thought bock was a number and ran a regression. Let’s clarify this for R by mutating black to be a factor.

We take these estimates and uncertainty about them seriously, but fully ignore the t and p-values, as above. From here we predict diversity in

In this model, the null and alternative hypotheses are

Figure 27.5: Null (a) and alternative (b) hypotheses for our blocked predation experiment.

Again we test these hypotheses in an ANOVA framework

We again use the sequential method to calculate sums of squares because we first want to account for block. The code below shows you how anova() got its answer. But in our case we ignore the F-value and significance of block, as it’s in the model to soak up shared variation, not to be tested.

So we rejected the null hypothesis and conclude that predator abundance impacts zooplankton diversity. Which treatments differ? Again we, conduct a post-hoc test.

Instead of using the aov() function and piping the output to TukeyHSD(), here I’ll show you how to conduct a posthoc test with the glht() function in the multcomp package.

In the code below, I say I want to look at all pairwise comparisons between treatments, using the Tukey-Kramer method from Chapter 25.