This text (roughly) follows Chapter 12 of our textbook. The reading below is required, Whitlock and Schluter (2020) is not.

Motivating scenarios: We are interested to investigate the difference between the means of two samples.

We often want to know the difference in means between two (unpaired) groups, and test the null hypothesis that these means are identical. For this linear model, 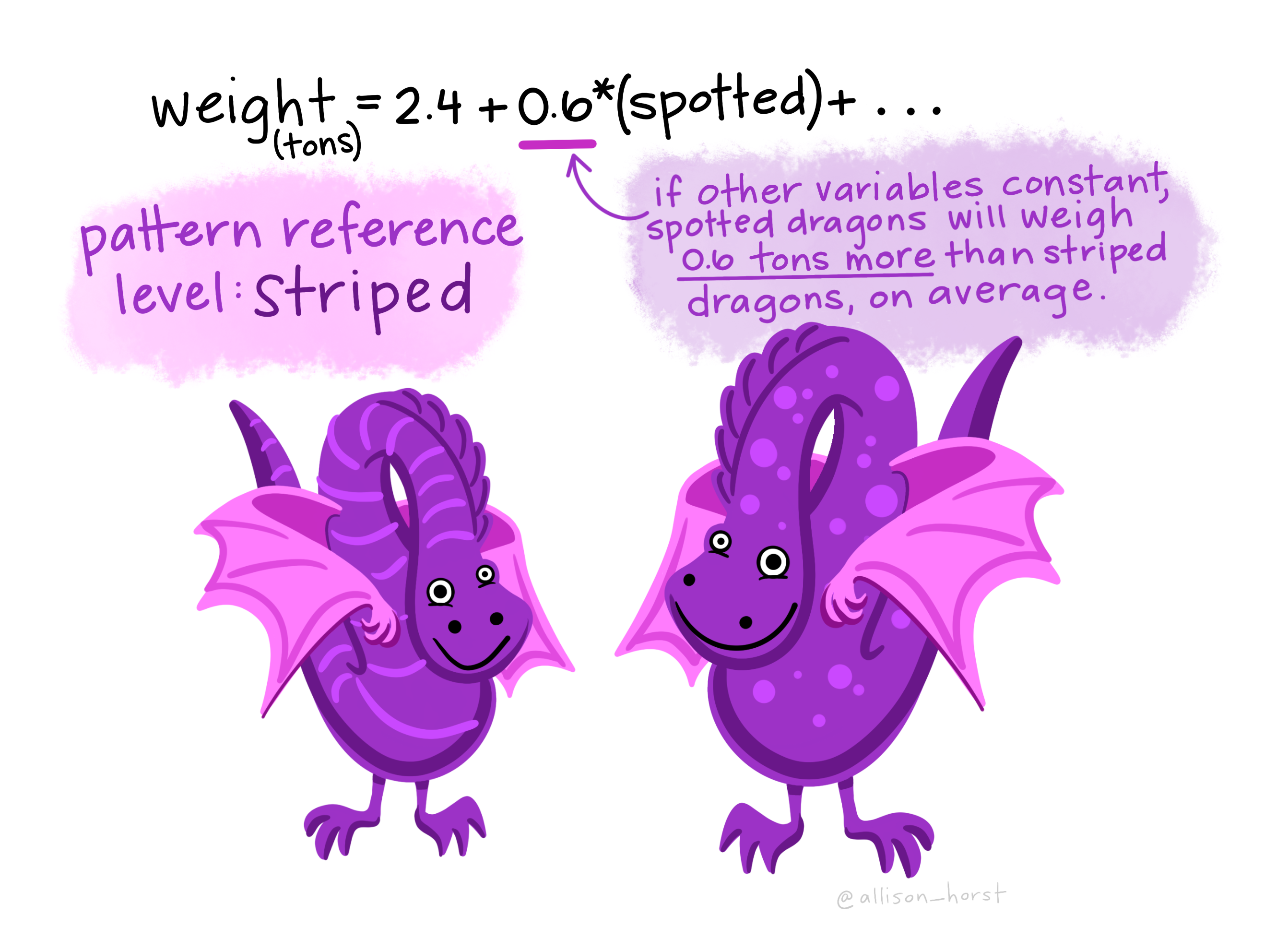 Living Lizard summary stats: From our sample of 154 living lizards, the mean horn length was 24.28, with a sample variance of 6.92.

Killed Lizard summary stats: From our sample of 30 killed lizards, the mean horn length was 22, with a sample variance of 7.34.

Summarizing the difference in Killed and Living lizards: So, surviving lizards have horns that are 2.29 longer than killed lizards.

Lizard survival as a linear model

From these values, we can describe the horn length of the \(i^{th}\) lizard as

Where \(e_i\) is the residual difference between group mean and the value of individual, \(i\), and living is an indicator variable which equals one if living, and 0 if killed. This trick thinks of a lizard as a killed lizard, and then adds 2.29 mm to this length if the lizard survived.

R’s output describes this as

24.2 Calculations for a two sample t-test

How do we think about this variance? I like to think of it as “how far on average do we expect the square of the difference between one random individual from each group to deviate from the average difference between groups”. A quantity that nearly captures this is the pooled variance, \(s_p^2\), which is the variance in each group weighted by the degrees of freedom in each group, \(df_1\) and \(df_2\) and divided by the total degrees of freedom, \(df_t = df_1+df_2\).

Calculating the pooled variance in the lizard example

We can do this math in R

Effect size of the difference in Killed and Living lizards: Above we found that surviving lizards have horns that are 2.29 longer than killed lizards. But recall that our estimate of effect size, Cohen’s D, standardizes this difference by the standard deviation to give it more context. The math below shows that the average surviving lizard has a horn about 0.87 standard deviations larger than the average killed lizard. That’s pretty substantial.

So Cohen’s d showed a very large difference in horn lengths. But how does this difference compare to what we expect by sampling error?

We could, of course, get a sense of this sampling error by resampling from each group with replacement, and calculating the mean difference for each “bootstrapped” replicate to approximate a sampling distribution, and use this to calculate a standard error and confidence interval

Again, we can do these calculations in R. We see below that these mathematical answers are really close to the bootstrapped based estimates of uncertainty.

How surprised would we be to see such an extreme difference if we expected no difference at all? The p-value quantifies this surprise.

We can, of course estimate this by permutation

We find a very small p-value and reject the null hypothesis.

Piping this outpot to tidy makes it more compact

Reassuringly, R’s output matches our calculations (but it swaps group 1 and 2, so watch out for that)

We have already seen that we can consider this as a linear mode lizard_lm <- lm(squamosalHornLength ~ Survival, data = lizards). Looking at this output, se see that the p and t-values are the same as those we got for our t-test, so that’s good!

An assumption is basically a statement we make for mathematical convenience. We do this to make stats tractable (otherwise we’d either be doing different math for each data set or bootstrapping and permuting only).

But often breaking assumptions does not break a test. In fact, many statistical tests are remarkably robust to violations of their assumptions (but some are not).

How can we know if breaking an assumption will break our stats or if it’s safe?

We will simulate soon to show you what I mean, but for now, trust me, I know.

Remember that all linear models assume: Linearity, Homoscedasticity, Independence, Normality (of residual values, or more specifically, of their sampling distribution), and that Data are collected without bias.

We can ignore the linearity assumption for a two sample t-test.
While we can never ignore bias or non-independence, we usually need more details of study design to get at them, so let’s focus on homoscedasticity and normality.

This makes sense as we used a “pooled variance” in the two sample t-test – that is, in the math we assume that both groups have equal variance equal to the pooled variance.

This similar distribution of residuals lines up with our calculations of a variance of 6.92, and 7.34 in living and killed lizards respectively. That’s pretty similar.

How similar must variances be to make a two-sample t-test ok? We’ll explore this soon, when we’ll see that the t-test is robust to violations of this assumption. In fact, as a rule of thumb, if variance in one group is less than five times the variance in the other group, we’re usually ok.

Note this means we assume the differences from group means are normally distributed, not that the raw data are.

We could evaluate this assumption with the autoplot() function in the ggfortify package. But let’s just do this our self by making a qqplot

The data are obviously not normal, as the small values are too small (below the qq line). But the sample size is pretty big, so I would feel comfortable assuming normality here.

24.5 Alternatives to a two sample t-test

So, what to do if we break assumptions.

Let’s start at the bottom of the list – what are alternatives to the two-sample t-test?

We saw above that we can bootstrap (i.e. resample with replacement) to estimate uncertainty in the estimate of the mean difference, and we can permute (i.e. shuffle labels) to generate a null sampling distribution for hypothesis testing.

These approaches make nearly no assumptions and most always work, but generally require modest sample sizes of at least fifteen in each group or so, such that resampling from them with replacement generates enough combinations to reasonably approximate the sampling distribution from a population.

If the variances differ by group, we could do a Welch’s t-test, which does not assume equal variance. Here we use a different equation to calculate the t value and degrees of freedom 24.8, which you need never know.

The only difference is that now the sampling distribution uses the variance from each group, rather than combining the variance into its average, “pooled variance”.

If residuals are not normal, we would usually do a permutation test nowadays. Historically, however, people used “rank based” “non parametric” tests when data weren’t normal. Here we

Here’s an example in R

These tests are falling out of fashion because they don’t provide any estimate of uncertainty, they make their own assumptions about the distribution of data, and because permutation and bootstrapping can be done on our home computers. So I keep this here just to expose you to it. Know it’s a thing you might hear about some time, and know that we’re not worrying about it here.

If you can write down a likelihood function (like in Chapter 22.8.1) you can customize your assumptions to fit your data.

We often want to know what to expect from a statistical test. For example, we might want to

We can do both of these things by simulation!!! Here I focus on robustness of the two sample t-test to violations of the assumption of equal variance.

I then make data for samples of size ten and fifty. The code here is a bit awakard but basically for each experiment I

We then find the p-value for all of these data simulated under a null, but breaking test assumptions

Finally, we assume a traditional \(\alpha = 0.05\) and look for the proportion of times we reject the false null.

The plot shows that violating the assumption of equal variance seems to matter most when sample size is small and violations are extreme.

You don’t need to know this, but the formula for Welch’s t-test is

With degrees of freedom equal to