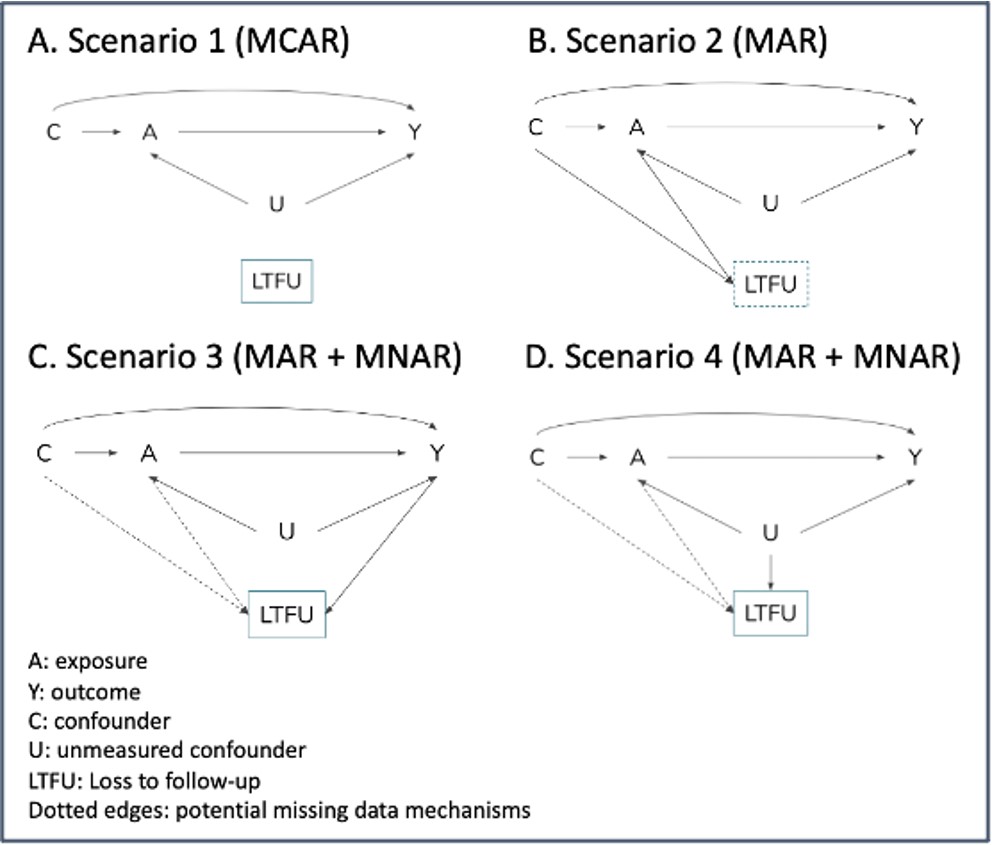 Scenario 1 (Figure 1-A) describes a situation in which there is LTFU in a given study but no variable (measured or unmeasured) predicts LTFU. Thus, given this DAG is correct, we can assume that outcome data are missing completely at random (MCAR) and we can proceed with a complete case analysis.

In Scenario 2 (Figure 1-B), LTFU is caused by either the exposure (A) or a confounder (C), or both. Since the exposure and confounders are observed in the data, missing data are missing at random, conditional on these predictors of missingness. Given our DAG is correct, we can assume that there are no unmeasured mechanisms that cause LTFU in addition to these measured mechanisms. Unlike the following two scenarios, this mechanism is data-driven, and we can measure it in relation to Scenario 1 using frequentist methods.

Scenario 3 (Figure 1-C) reflects one plausible situation in which outcome data are missing due to LTFU through multiple mechanisms. The mechanisms from Scenario 2 may still exist (and these are verifiable in the observed data), but LTFU may additionally be caused by the outcome itself. The latter mechanism is not measurable because outcome data will be inherently missing for those LTFU. Thus, Scenario 3 requires a sensitivity analysis that can test different magnitudes of the MNAR mechanism. Pattern-mixture modeling specifically requires that the researcher sets priors that reflect some sort of distribution of the magnitude of the MNAR mechanism’s effect on the missing outcome data.

Scenario 4 (Figure 1-D) reflects another plausible situation in which both MAR and MNAR mechanisms produce missing outcome data due to LTFU, except in this case the data that are MNAR are due to a mechanism in which an unmeasured or unknown confounder causes LTFU. Like Scenario 3, Scenario 4 also requires a sensitivity analysis that can test different magnitudes of the MNAR mechanism.