Reproducible Science for Busy Researchers: How to Save Time using Literate Programming

Data Wrangling is the process of cleaning and manipulating your data.frame. I have never obtained a dataset that did not need to be cleaned or organized in some fashion (if you have I am quite jealous). The packages I rely on the most are

My suggestion is to take this cheat sheet and frame it. Over time you will become VERY familiar with these functions but you can’t expect that of yourself this early. Although the cheat sheet goes through many of the functions you will need, I will go through a few common tasks below.

If you want to learn more on why Data Wrangling is so important check out Hadley Wickham’s paper here it provides a thorough breakdown of its importance.

If you are having a hard time understanding the steps in each pipe, you can take a look at ViewPipeSteps an add-in which will give you a more literal description of each step in the data wranling process.

At the very top of my script I will load the packages I need to get things done. This will vary slightly depending on the script. For example some of my packages (e.g., lme4 or easystats) are only loaded when I run statistics. There’s a few example below, I suggest skipping to the section that applies to your situation.

You should have data that you are trying to manipulate. Below I show the most common examples. I generally always call my data df. This allows me to easily copy/paste code between projects. Its good practice to do this if you can. Therefore, as you advance with your R scripts you won’t need to spend precious time using Find/Replace.

I have recently switched my philosophy to use rio which greatly reduces the students requirements.

When I have particularly large files to write from MATLAB, I prefer to use *.csv files over *.xlsx because they write faster. If you are dealing with datasets that are larger than 1GB in size you should consider using data.table instead of data.frame.

It is also possible to read from a Google Sheet using the googlesheets4 package.

This is the general data format for SPSS. With this filetype “attributes” are also imported, which normally I like to remove. In my own experience, some functions don’t play nicely with dataframes that have labels. You can read more on this here.

A full tutorial on importing other data types can be seen here on DataCamp. In general, try and stick to the formats shown above. If you are importing data from another statistical program (e.g., SPSS, STATA or SAS) you will often get a ton of attributes that are imported in the data.frame. This can be a good thing at times because it may give you additional information on the column variable. However, some statistical functions tend to get fussy when your data.frame contains these attributes. These are shown below.

Figure 8.1: A dataframe with attributes being imported

Finally, its possible you want to open data from other forms including 1. .txt 2. . 3. SPSS 4. Mini-table

It’s possible to clean up your dataset as it comes in by using the janitor package. Click the link for a couple examples. In essence it will scan through the column names and fix them according to a notation you specify.

Now that you have your df loaded, lets take a look and see what we have. There are 4 types of data that can be held in a data.frame, in R these are referred to as class.

The class of your columns may not seem important right now, but later on when we manipulate the data, it will be crucial to make sure these are accurate. Below is an example of an xlsx file which is imported. We expected dti_value to be numeric, but due to a dash in one of the cells, it was imported as character.

Once you are done running your R Scripts you will want to save some outputs (notably statistical models and dataframes) so they can become part of your RMarkdown document (manuscript.Rmd).

We will want to save our results as an *.RData file. You can save outputs a few different ways. The first uses the default save function

However, this function will overwrite every time you run it. What if you want to add environment variables to an existing RData file? I created my own resave function based on the one provided from the cgwtools package.

Finally, its possible that you need to export the data for a colleague into a more useable file extension (because they aren’t cool enough to run their analyses in R yet…). We once again use the rio package to accomplish this.

My growing favorite export is to use Google Sheets

Among the issues you may encounter with your data is inconsistencies in columnnames. This can be rather annoying. In order to alleviate this, I like to pick one format and stick with it. When I receive a dataset from another researcher I will often use snakecase to modify their dataset accordingly. This package is incorporated into janitor

Because of this, one of my first steps is to use clean_names() from the janitor package. It will

There are a few ways to rename your variables. The key is to pick your favorite and stick to it. My recommendation while coding is to avoid using spaces if at all possible, they will make your life miserable. Below are a few examples you can consider.

You can take a deep dive into some naming convention options by reading about the snake_case package documentation. I would recommend the breakdown by Almost Random 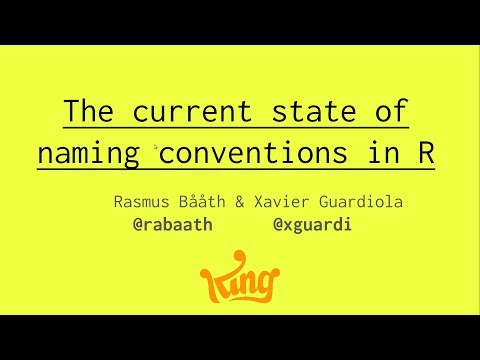 Filtering your data is arguably the most common task you will repeat. There are several ways to filter data. The code chunk below goes through a few examples

View the discussion about str_detect and multiple patterns on StackOverflow

For a special case of filtering head over to StackOverflow

This will come in handy when we create tables to be used in our Rmd document In some instances you might want to round all numeric columns.

However, in most of my own datasets I do not want to round across all columns.

Very useful in case you want to remove specific columns

Below are a few different ways to removes blanks, which are imported as NA in RStudio data.frames

You can also create factors while using the %>% and mutate()

In the code below I want to replace text in the Test column. Notice how I call the column once and then use the pipe operator to list the rest

We won’t go into this in much detail for now but you can also choose to mutate based on conditions using case_when which has come up very useful for me in the past.

A special case of case_when I ran into when I wanted to replace certain values with NA. Note that you may need to use NA_real_ is the numeric version of NA, and that you must convert your current column to numeric because you created it as an integer in your original dataframe. See here

8.7 Converting from wide to long

Almost without exception, you will want your data to be in the “long” format. This can be a tricky operation.

Almost without exception, you will want your data to be in the “long” format. There are several papers which explain why this is the preferred practice.

This is a very common task for example, in my experiments it’s common to have 2 files

There are several ways to “join” dataframes. We want to “merge” these into one big data.frame….how do we do it???

Figure 8.8: My experience with MATLAB plots

First, we need to see which columns the datasets have in common and confirm the columns are named the same.

As we inspect the data we see that in df the column ID is named study_id in df.demo. Similarly Group in df is named group in df.demo. We can save ourselves some headaches by adding a few lines after importing the data.

Now we can finally merge the columns. We want to merge by ID. There are several ways to join data. In our example we are going to use left_join. Within the function, two dataframes are called (usually referred to as x and y). In the animation below “x” is df while “y” is df.demo.

Notice that at the moment, we have two Group columns. One coming from the x dataframe which is df and one stemming from the y dataframe df.demo. In order to fix this problem we are going to add another column to join in our statement

We now have a dataset which has both the concussion score and demographic data combined into one! Before continuing I like to remove dataframes that are no longer in use. This keeps our Global Environment tidy.

When you get close to the end of data wrangling you may want to re-organize the order of your data.

For students looking to get more practice on merging datasets, I would highly recommend the Relational Data chapter of the R for Data Science book by Garrett Grolemund and Hadley Wickham.

Here are a few resources on wide vs long data formats

We won’t cover working with dates much in this guide, because its not typical. However, should you need them the link below provides a general walkthrough.

Misc code is shown below. This is for me, while I finish the book. Please ignore it for now.

You can also choose to mutate based on conditions using case_when which has come up very useful for me in the past.

Although strongly not recommended you can also loop through dataframes

The likert package seems great. I have used it to great success in past projects.

regex is short for “regular expressions” and they are commonplace in almost all programming languages. They are not for the faint of heart, for this reason I would not recommend this section unless you have mastered all the other sections of this chapter (which are more commonly used).